Run Microsoft Exchange on VMware vSphere to not only match, but exceed the performance of physical servers by 100% or more. Consolidate multiple Exchange server roles and mailboxes to reduce infrastructure footprint by 5X to 10X. Maximize Exchange availability without the complexity of Microsoft clustering. Right-size Exchange infrastructure and scale your mailboxes dynamically to support increasing loads.

Double the Performance of Your Exchange Infrastructure 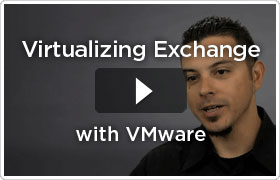 Microsoft Exchange 2007 and 2010 perform very well on VMware vSphere. Run all Exchange server roles, including the mailbox server, on vSphere with confidence, to not only match but exceed the performance of physical servers. Each VMware vSphere virtual machine scales to 32 vCPU and 1 TB of memory, and can easily support the IO intensive requirements of Exchange mailbox servers. With VMware vSphere, multiple mailboxes can be scaled out on larger multicore servers to increase overall throughput. For example, on a 16 core server, we have demonstrated that VMware vSphere can double the maximum throughput achieved with Exchange 2007 from 8,000 to 16,000 end-user mailboxes.

Exchange infrastructure can typically be consolidated by 5X to 10X with vSphere. Consolidate multiple Exchange server roles onto shared physical servers and eliminate the need to deploy dedicated standby hosts for high availability and disaster recovery.

Accelerate delivery of new email services. Provision new Exchange instances or additional services such as BlackBerry Enterprise Server from pre-configured vApps in just minutes. Use VMware snapshots and clones to reproduce your Exchange environment in the lab for testing and troubleshooting, and eliminate the need to maintain a dedicated test environment.

Microsoft officially supports VMware vSphere for running Microsoft Windows and major applications including Microsoft Exchange, SQL Server, and SharePoint Server. VMware ESX was the first hypervisor to be validated under the Microsoft Virtualization Validation Program (SVVP), providing customers who run Windows Server and Microsoft applications with cooperative support from Microsoft and VMware. Customers can now run Exchange on vSphere with the peace of mind that they will receive the same level of support they received on physical servers.

Leverage the latest advances in VMware vSphere and Exchange performance to run the largest mailbox server instances with confidence that performance will match or exceed physical performance.

The performance and scalability of VMware vSphere have improved dramatically over the latest product releases. vSphere is able to handle the most demanding workloads thanks to improvements such as:

Together, these performance improvements ensure that even large, demanding mailbox servers perform well on vSphere with no IO bottlenecks or other performance problems. As demonstrated in our labs, Exchange can be scaled out very efficiently on vSphere and can be scaled up to support large mailboxes.

Increase the performance of your physical infrastructure by 100% or more. For example, without VMware, a single Exchange 2-7 mailbox running on a physical server can scale up to about 8,000 heavy user mailboxes. Using larger servers doesn't help because the mailbox can't leverage the additional capacity.

With VMware, Exchange mailboxes can be scaled out on multiple smaller virtual machines to maximize the throughput of the physical server. Using this approach, we have demonstrated that Exchange can be scaled out on 8 Virtual Machines, each supporting 2,000 very heavy mailbox users, to support 16,000 users on one 16-core server.

Ensure Availability without the Complexity of Microsoft Clustering

Provisioning new email services into production can take months of lead time to procure and install dedicated hardware, provision and configure the OS, and finally configure the application. This long manual process is also error-prone and can lead to configuration mistakes and service downtime.

With vSphere, create a library of vApps that can be provisioned on demand onto your existing virtual infrastructure in minutes. For example, with virtual appliances, reduce the lead time to deploy BlackBerry Enterprise Server from weeks or months down to minutes.

Test and troubleshoot your complex email applications quickly while minimizing risk of change. Use vCenter Snapshots and Clones to reproduce your vApps, encapsulating entire multitier applications, in the lab in minutes. Test your application changes in the context of related application tiers, and on an exact copy of your production configuration, to minimize the risk of errors. Eliminate the need to provision applications manually for each test cycle.

VMware ESX was the first hypervisor to be validated under the Microsoft Virtualization Validation Program (SVVP), providing customers who run Windows Server and Microsoft applications with cooperative support from Microsoft and VMware. Customers can now run Exchange on VMware with the peace of mind that they will receive the support they need.

Microsoft licensing has recently been modified to allow customers to reassign licenses between physical servers as frequently as desired. In the past, licenses could only be reassigned once every 90 days, limiting the benefits of vMotion. The new licensing flexibility enables efficient use of vMotion for Windows Server and major applications including Exchange, SQL Server, and SharePoint Server.

The following scenarios are common:

Scenario 2: VMware software was originally purchased direct from VMware or a VMware authorised reseller and the customer has a valid Microsoft Premier-level support agreement
Microsoft states that it will use "commercially reasonable efforts" to support its products running on VMware virtual machines. Customers regularly tell us that Microsoft's commercially reasonable efforts are effective and appropriate to maintain operations as planned. There may be confusion within Microsoft's field and channel organizations regarding the scope of support that can be provided, and in some cases, customers may perceive that "commercially reasonable efforts" will not meet their expectations. In general, Microsoft offers its large customers excellent support for their products running on VMware. Microsoft's policy states that after such efforts are exhausted, Microsoft support specialists may request that customers replicate the issue on a physical machine in order to proceed with the investigation.

Scenario 3: VMware software was originally purchased direct from VMware or a VMware authorised reseller and the customer does not have a Microsoft Premier-level support agreement
Microsoft's level of support for these customers can be more restrictive. Before providing support, Microsoft specialists may request that customers first replicate the issue on a physical machine per Microsoft KB 897615.